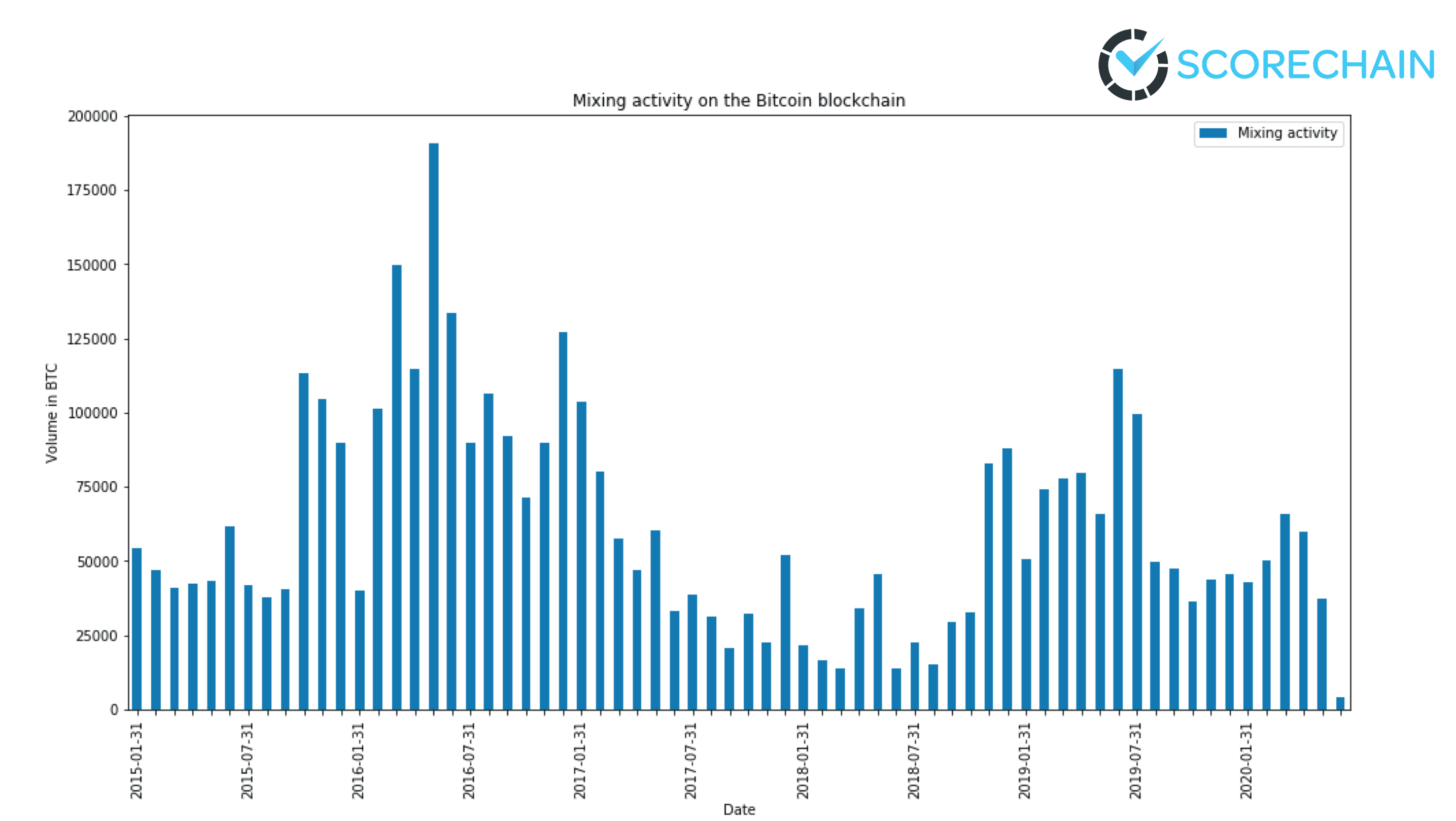 By design, the Bitcoin Blockchain is transparent but anonymous. The use of mixing platforms or mixing transaction techniques has started at the early beginning of the network and gained popularity over the years.

The surge for using Mixing platforms can be explained by the fact that Bitcoin users look for privacy inside the network. The idea is to put anyone looking at the Blockchain off the scent with different techniques. It does not necessarily mean that activity with coins behind was bad, but the question still remains: is this researched privacy legit or a cover for crypto crime and money laundering?

Mixing transactions is a process to blur transactions with different more or less advanced techniques. There are 2 ways to do so:

2. Do it on your own, alone or with partners and use techniques such as Coin Join transaction, or SharedCoin Service, smurfing and more…

When mixing bitcoins, users send money to an anonymous online service. The platform will just tumble the coins with other ones and send back the same amount of coins to the user. Those funds will come from multiple sources and can’t be traceable to the holder.

Mixing platforms take a certain percentage of transaction fees to turn a profit.

2. CoinJoin is an anonymization method for bitcoin transactions.

In case of such a joint payment, inputs and outputs are mixed in one transaction so it’s impossible to spot the exact direction of money movement. If you read the Blockchain you will not be able to see the right wallet where it came from. In other words, the CoinJoin concept acts as a meeting point for multiple people to join together in a single transaction.

At Scorechain we are able to identify mixing whatever techniques are used. For an online platform, we are able to detect some clustering addresses and identify the service.

For CoinJoin transactions, Scorechain has also the ability to provide behavioural analysis and thus, to detect mixing transaction patterns.

In the end, funds will be mixed, but Scorechain platform is able to say that the user has used such a platform or technique.

Why do users mix coins?

Some users advocate they are using mixers to protect their privacy. Imagine you pay your employees with bitcoins, it’s true they don’t want this information to be publically written in the Blockchain forever.

However, mixers can be used for money laundering. This is a common, cheap, quick and efficient practice. Some users can use mixing techniques to wash tainted coins. Imagine you earned coins on a dark web marketplace and you want to cashout and/or to bank this money. Most probably you want to hide the origin of funds and get ‘clean’ coins instead. This is where mixers can help tremendously.

History of use of mixing

The Bitcoin network has started to use mixers since the early beginning, because the first Bitcoin users are very attached to privacy. Also, back then, criminal activity throughout the network was very active and mixing softwares was an excellent way to wash money.

In addition, in 2013 Silk Road Darkweb marketplace was forced to close and thus the popularity of using mixers just increased.

The explosion of mixing in 2016 was supposedly due to the lack of regulation.

In 2019 Scorechain charts clearly identify a rise of popularity for mixing transactions. This can easily be explained with the massive use of the well-known services wasabi wallet and samurai wallet which are privacy-oriented wallets.

Indeed wasabi wallet strives to provide privacy to its users with mixing techniques. At that time Bitcoin reached a larger adoption and knowledge from its users with people willing to bring privacy to their transactions inside the network.

Why should this be considered as a risk and how to implement a risk-based approach?

Users of mixing can be ill-intentioned people and mixing techniques are advanced so it makes almost impossible to retrieve the coins’ wallet owner.

Using Scorechain Risk AML Software, you can be at least aware when someone has used mixing techniques at some point.

In which way mixings behaviours are reflected on Scorechain?

– Redflag with key risk indicators: Scorechain users, who have configured ‘mixing’ as a risk indicator, will receive indications when the indicator is triggered. The red flags are displayed at a level of the transaction, address and wallet. Besides, the KYT (Know-Your-Transaction) report also includes this important element.

– Redflag with an impacted risk scoring: risk scoring will be lower if a transaction / an address / a wallet is involved with mixing patterns. For a better risk-based approach, Scorechain Risk ponderated formula is designed in a way that risky elements have a stronger relative impact in the global scoring. The more risky the elements are, the more they weigh on the scoring computation.

– Mixing score can also be lower to emphasize its impact: the users can customise the scoring of mixing according to their risk appetite in order to have a better risk control. Scorechain solution allows user the customise the scoring by entity and by type, including “mixing” type. Lowering its score can also be a good way to keep a close eye on this kind of suspicious activity to mitigate the risk.

Thanks to Scorechain crypto risk AML solution, the users can be aware in time of any mixing behaviours. What’s more, it is essential to define the prevention and control measures to tackle the issue, for example, once the suspicious activity is detected, freeze the funds, report to the authority, conduct enhanced due diligence, etc. to gather more information to help with making decisions.

As a European leader in cryptocurrencies AML & Compliance solutions, Scorechain serves worldwide customers in 29 different countries with more than 150 licenses established. Scorechain Analytics include Bitcoin analytics with Lightning Network, Ethereum analytics with more than 250.000 ERC20, Litecoin, Bitcoin Cash and Dash. All products are available both on UI and API, with full customization and reporting features. With a powerful and unique scoring system, Scorechain’s products allow traditional finance players and cryptocurrency companies to apply a risk-based approach for this new class of assets and fulfil all new regulation requirements.

To know more about Scorechain products, welcome to contact us: contact@scorechain.com